Warzone 2: Release Date, Platforms. What Is It, Leaks, Rumors and More

Warzone has without a doubt been one of the best battle royales to ever release, and many have cited that its saved the Call of Duty franchise.

With Warzone's popularity dipping recently, a rumored plan of COD releases for the next couple of years has given us indication that Warzone 2 is coming.

In a new Bloomberg article, they noted that the next three CODs are going to be as follows.

This was later posted to social media by avid leaker Tom Henderson, who also noted that this is the first time he's hearing any news.

Hence the name, Warzone 2 is going to be the direct sequel to Warzone itself, and its apparently going to be a stand-alone title that won't have anything to do with Warzone 1.

Tom Henderson has noted that its only going to be playable on current-generation consoles and PC and will have no weapon integration from previous CODs.

So, it'll only release on Xbox Series X/S, PS5 and PC from what we can tell right now.

Warzone 2 is literally that... Warzone 2.

Current gen and PC only... No past weapon integrations etc.

A completely new game for the better hardware.

Furthermore, since the concept itself seems a bit confusing off the top, Tom Henderson has posted a image that explains the premsis of Warzone 2. 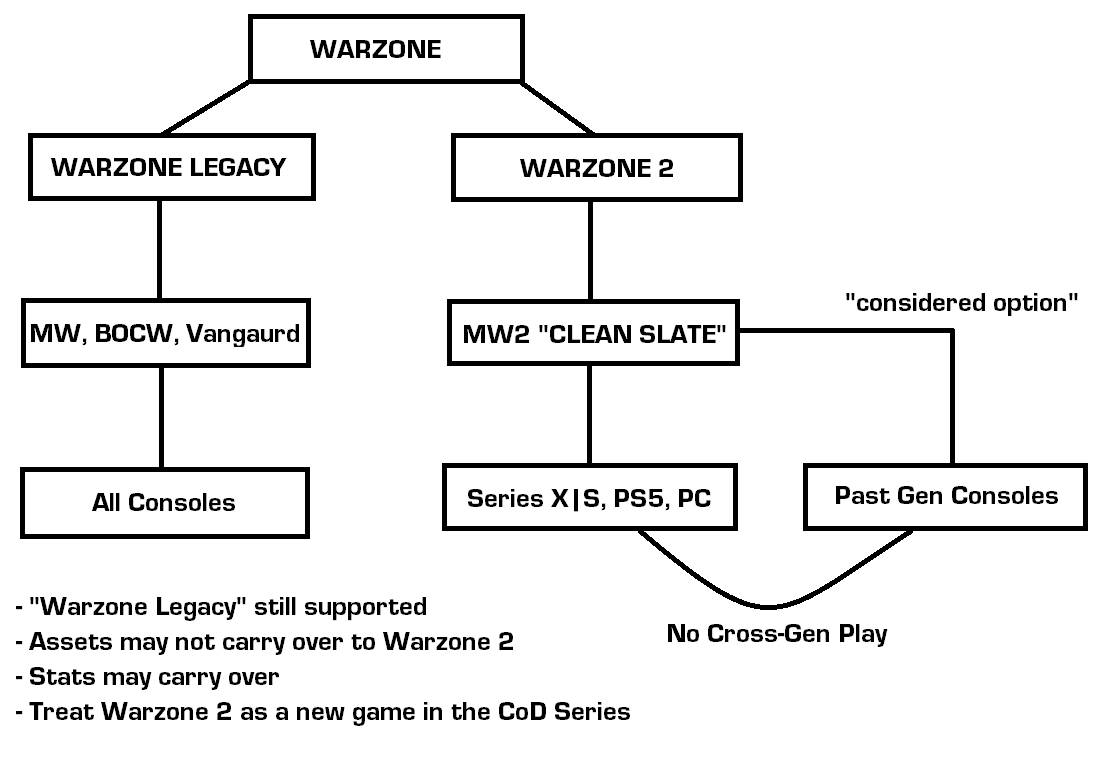 There's been numerous leaks and rumors pertaining to the new Warzone ever since it was leaked.

the official Call of Duty blog themselves noted that there plans for Warzone in the near future is as follows.

"The number one priority for our developers is “Quality of Life” – making changes that allow Warzone to be more accessible and less frustrating for our community.

Examples of this include over 30 improvements coming at Season Two’s launch, including:

- Improvements in all forms of movement: vehicle handling, parachutes deploying at a lower vertical height, increased player mantle height, and collision fixes for both vehicles and players.

- The Gas Mask animation no longer interrupting Operators who aim down sights.

- When inserting Armor Plates, it refills a full plate of armor before filling damaged ones.

This is in addition to fixing bugs and issues. In Season Two, we are addressing several issues, including the following ones:

- Blockages to Modern Warfare® Multiplayer, which is tied to Warzone’s launcher.

The Call of Duty teams across our studios monitor both public community sentiment and every aspect of day-to-day action happening in our game. All that helps us identify issues and address them, and that is on top of what is found in development as is fixed before it is released publicly."

Tom Henderson noted that there's going to be an Observatory POI on the next Warzone map!

Leaker, NerosCinema posted a YouTube video noting some changes to Loadouts that they've heard about coming to Warzone 2, and they're rather interesting.

They state how Loadouts are going to be obtained via completing objectives within new locations called Strongholds. Think Fortnite's vaults they have around the map, but in terms of Warzone, and this all bascially means you won't be able to purchase one anymore it seems.