The Best SVT-40 Class In Vanguard

The SVT-40 is one of the Soviet Unions most iconic weapons, as the single fire rifle was a staple of their efforts during the second World War and has been replicated in titles over the years.

Here's the best loadout for the SVT-40 in Call of Duty: Vanguard.

With a staggering, 10 attachments to pick on your weapon, you're truly spoilt for choice.
When choosing your attachments, you'll want to consider what attachments will improve this weapons weak areas and how you tend to play.
As one would expect with any Marksman Rifle, the SVT-40 has a slow rate of fire, but offers high damage to players at all ranges, making it more than viable when playing Vanguard. 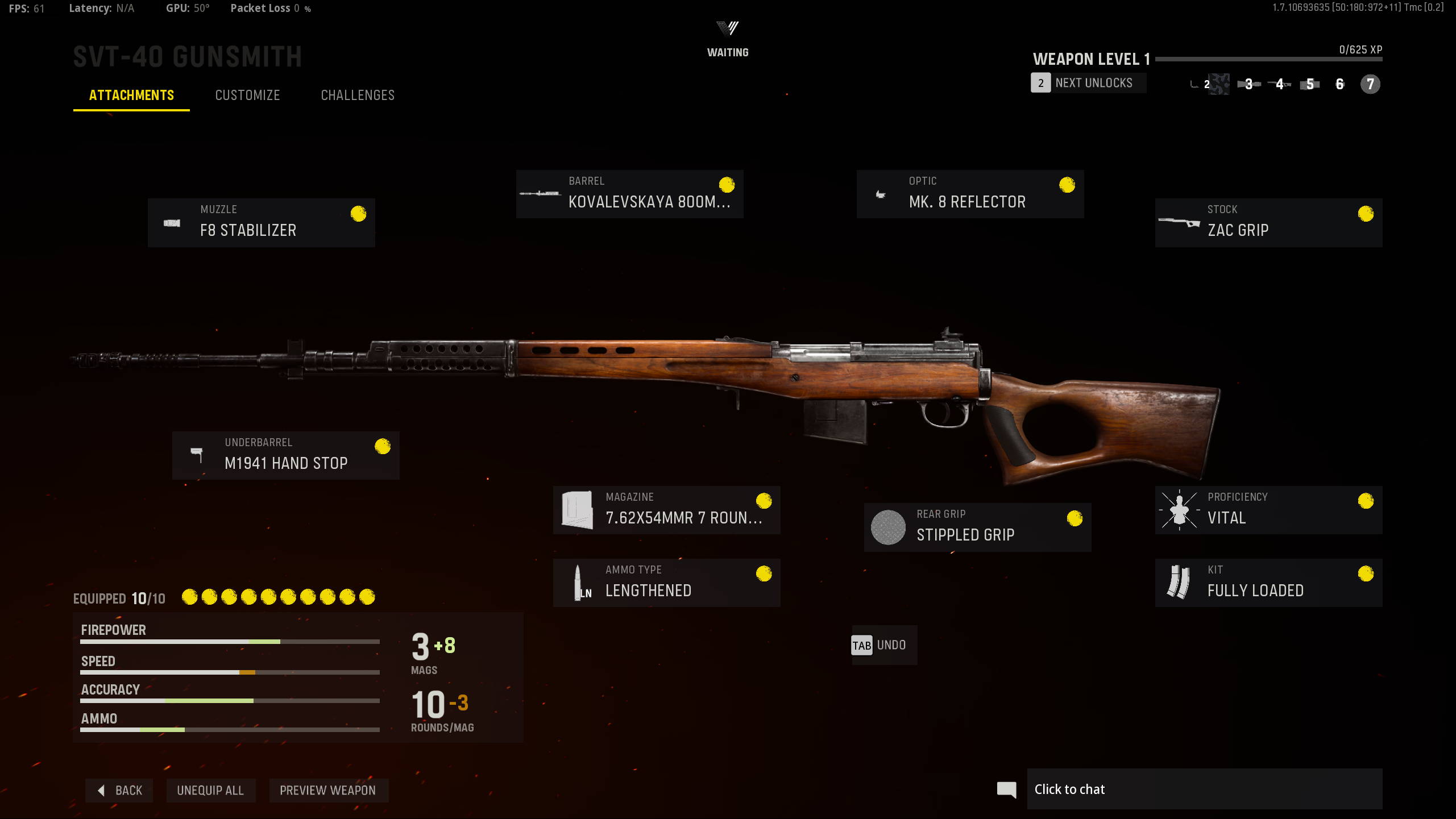 There's some Muzzle attachments that are decent for the SVT-40, but once again, we've chosen the F8 Stabilizer, as it offer some benefits to recoil control.
Your Barrel choice will be the Kovalevskaya 800mm, as it will bolster the recoil, and increase the one-hit kill area that every enemy has.
Your Optic comes down to preference in my opinion the MK. 8 Reflector is one of the best within the game.
For Stock, we've chosen one that offers players more ADS and walking movement speed which is essential when using a marksman rifle.
The Underbarrel option is one that's subject to change depending as there's some decent options here once again. We've chosen the M1941 Hand Stop.
The Magazine attachments are vast, and most of them either take away too much damage, or have a major effect on the recoil of the SVT-40.
So, we've chosen the 7 Round Mags, as they simply just have a little bit less ammo, but reload faster.
We've gone with the Lengthened rounds for this setup, none of the other options are really useable. But, if you want, you can experiment with the FMJ or Subsonic rounds!
More recoil buffs comes into play with the Rear Grip choice we've opted for with the Stippled Grip.
Your Proficiency also has viable options, Vital is without a doubt the best route to go too here. Offering players an increase area for critical hits!
Your Kit option is going to be Fully Loaded, as when using 7 Round Mags, you're going to need as much ammo as possible.

The Throwing Knife is always a fun lethal to use within COD, and if you get an enemy low enough, you'll be able to huck one of these in aim of getting a kill.

While on the flipside, you can never go wrong with using a Stun Grenade, as these will slow enemies down in their tracks.

Piercing Vision allows you to get some insight into where enemies are through walls, all so important when using a high power rifle such as the SVT.

The third perk is Overkill, as you may want to rock an SMG such as the MP-40 if you're in a pinch and don't want to use the SVT.

Hindering your enemies mini-map is always going to be annoying for the other team, and this is why we've gone the route of Jammer with this class. 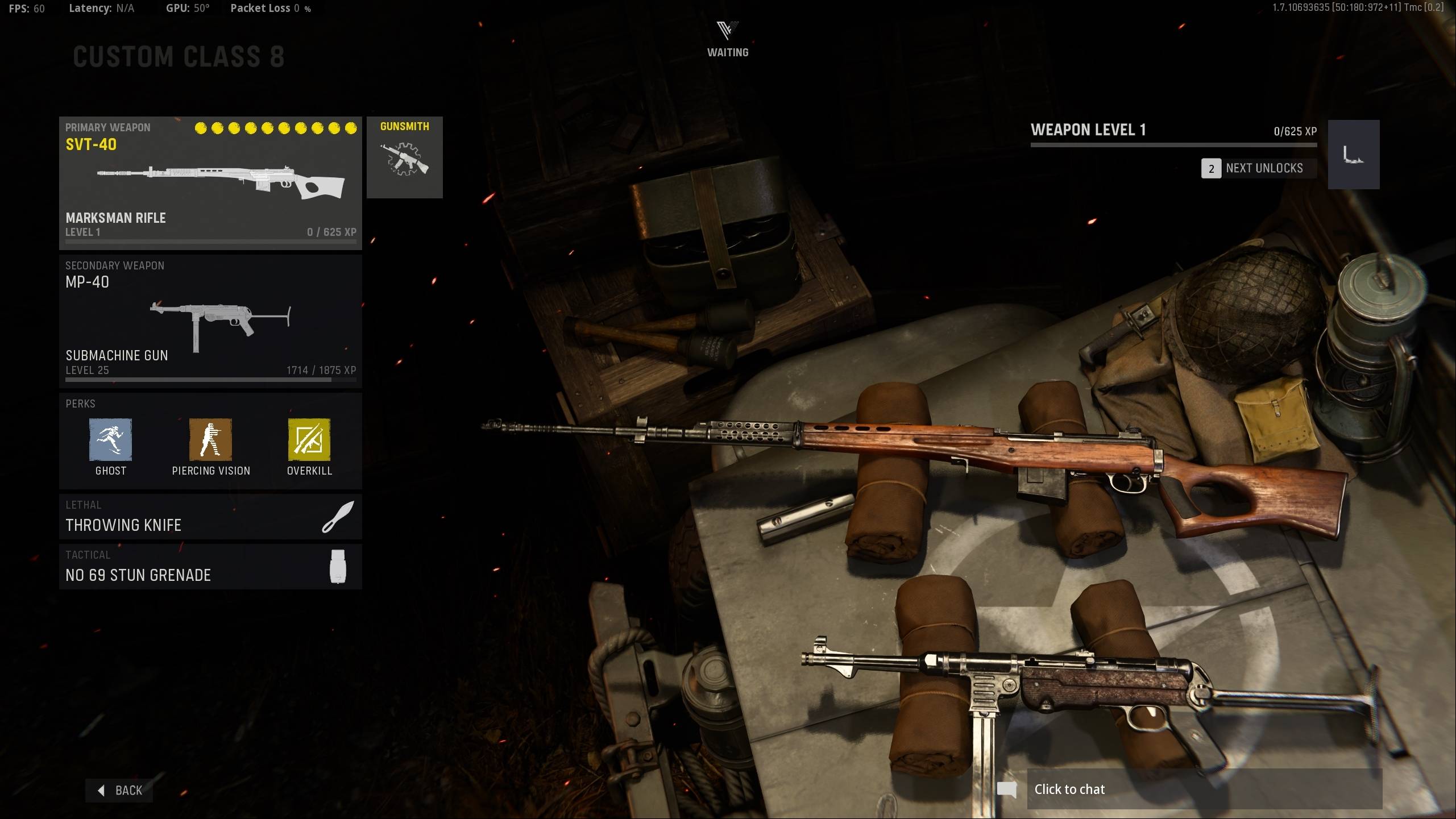