The Best BAR Class In Vanguard

With Vanguard now in the wild for players to enjoy, users are exploring the many weapons available and there's been some familiar faces when it comes to popular WW2 guns, and the Bar is one of these.

The American made rifle, that has been popularized in games over the years, the Browning Automatic Rifle is best known for dealing high damage, but with an albeit slow fire rate.

Within Vanguard, you're able to take full advantage of the Bar and make it one of the best rifles within the game.

Here's the best loadout for the Bar in Call of Duty: Vanguard.

With a staggering, 10 attachments to pick on your weapon, you're truly spoilt for choice.
When choosing your attachments, you'll want to consider what attachments will improve this weapons weak areas and how you tend to play.
The Bar, as one would suspect, suffers from a drastically slow fire rate, but has a strong amount of damage to go alongside the usually low magazine.
But, you're able to essentially make this weapon a powerhouse with more damage and the increased fire rate build we've gone after. 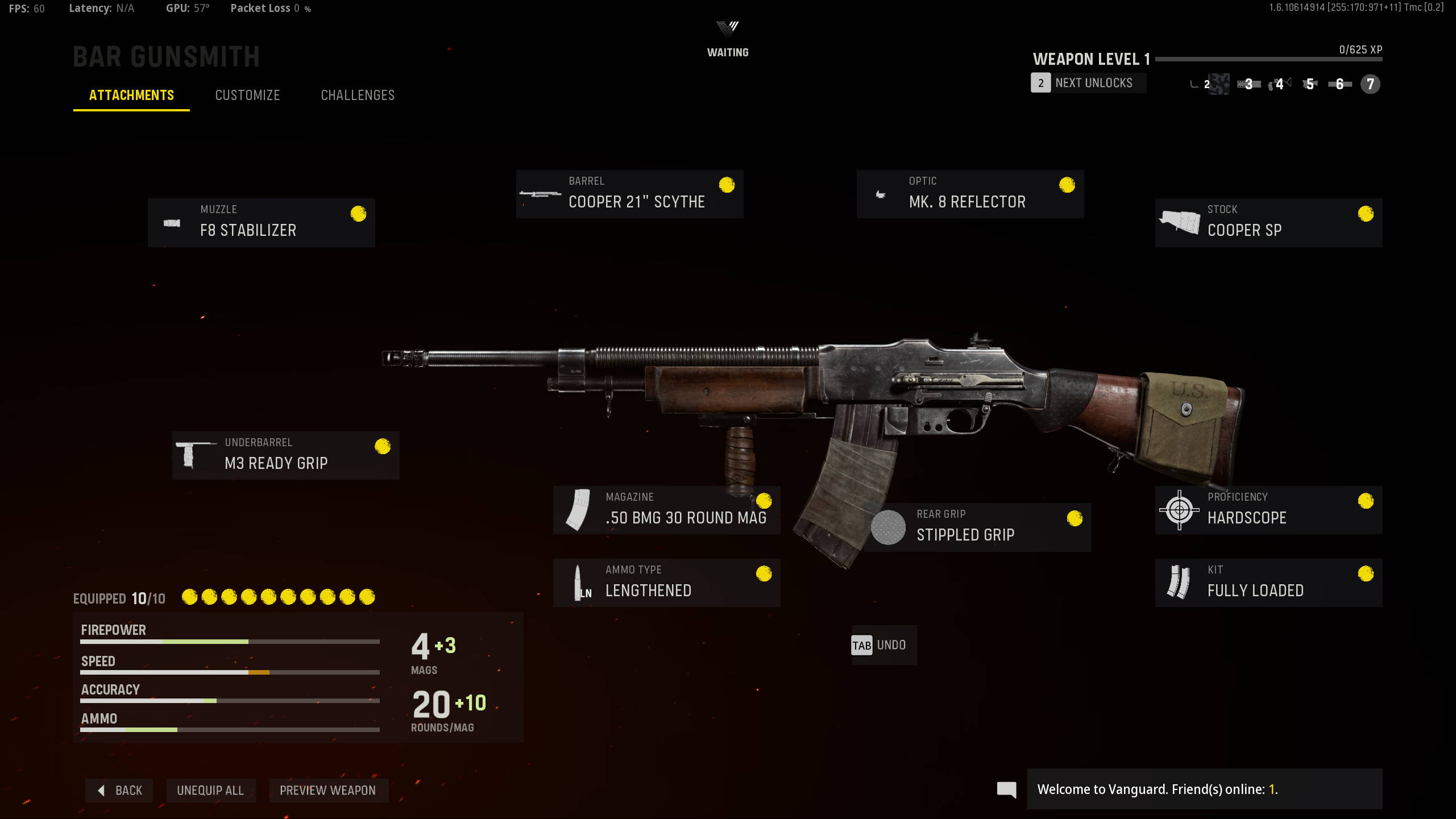 This setup is tailored to best suited for a more defensive playstyle, at the same time, it can be used up close, simply due to how powerful the Bar is.
We've selected a bulk of these attachments as they greatly increase the fire rate and damage of the Bar. However, we've had to sacrifice some of the accuracy and sprint to fire speed, but this should be manageable for most players.
There's some Muzzle attachments that are decent for the Bar, but the F8 Stabilizer is one that offers some increased accuracy and effective damage range, making it a good shout.
Your Barrel choice comes down to one option really, and this is the Cooper 21" Scythe, offering increases to all damage categories, with a boost to ADS.
Your Optic comes down to preference in my opinion the MK. 8 Reflector get's the job done.
Another Cooper attachment, as the Stock we've opted for is the Cooper SP. You can also opt for the CGC Wire, if you're looking to make a more mobile Bar loadout.
The Underbarrel option came down to the M1941 Hand Stop or the one we've chosen in the M3 Ready Grip. The latter boosts some of the movement stats that were taking a hit in with other attachments, so a good choice here.
The Magazine attachments are rather poor for the Bar, so it basically comes down to the .50 BMG 30 Round or 20 Round magazines. They both offer the same statistics, with the more ammo in the 30 Round mags being a fantastic benefit.
We've gone with the Lengthened rounds for this setup, none of the other options are really useable. But, if you want, you can experiment with the FMJ or Subsonic rounds!
More recoil control comes into play in regards to the Rear Grip. Stippled is the one we've opted for, as it's highly regarded as the superior option.
Your Proficiency also has some decent options with Sleight of Hand and Hardscope being the cream of the crop. The latter has increases control and accuracy when you're ADS for longer portions of time.
Your Kit options are limited for the Bar, with Fully Loaded being the only viable option, as who doesn't love more ammo.

The Gammon Bomb is a fun lethal option to choose, as it explodes on impact, so it can be deadly when thrown into a room or a closed hallway.

While on the flipside, the Stun Grenade is a classic COD tactical item, and you can never go wrong with using one of these within your loadout.

Ghost will keep you off the enemy radar while is always viable at any given time. Piercing Vision is great for this class, and aiming down your sights and holding the fire button with the Bar will undoubtedly net you some kills. While we've opted for Demolition for the last perk, as you're going to gain more lethal equipment, which is always nice depending on the map.

This Field Upgrade is regarded as the best for certain classes, and this is due to the increased health you'll gain, making it increasingly harder to be eliminated when in a gunfight. 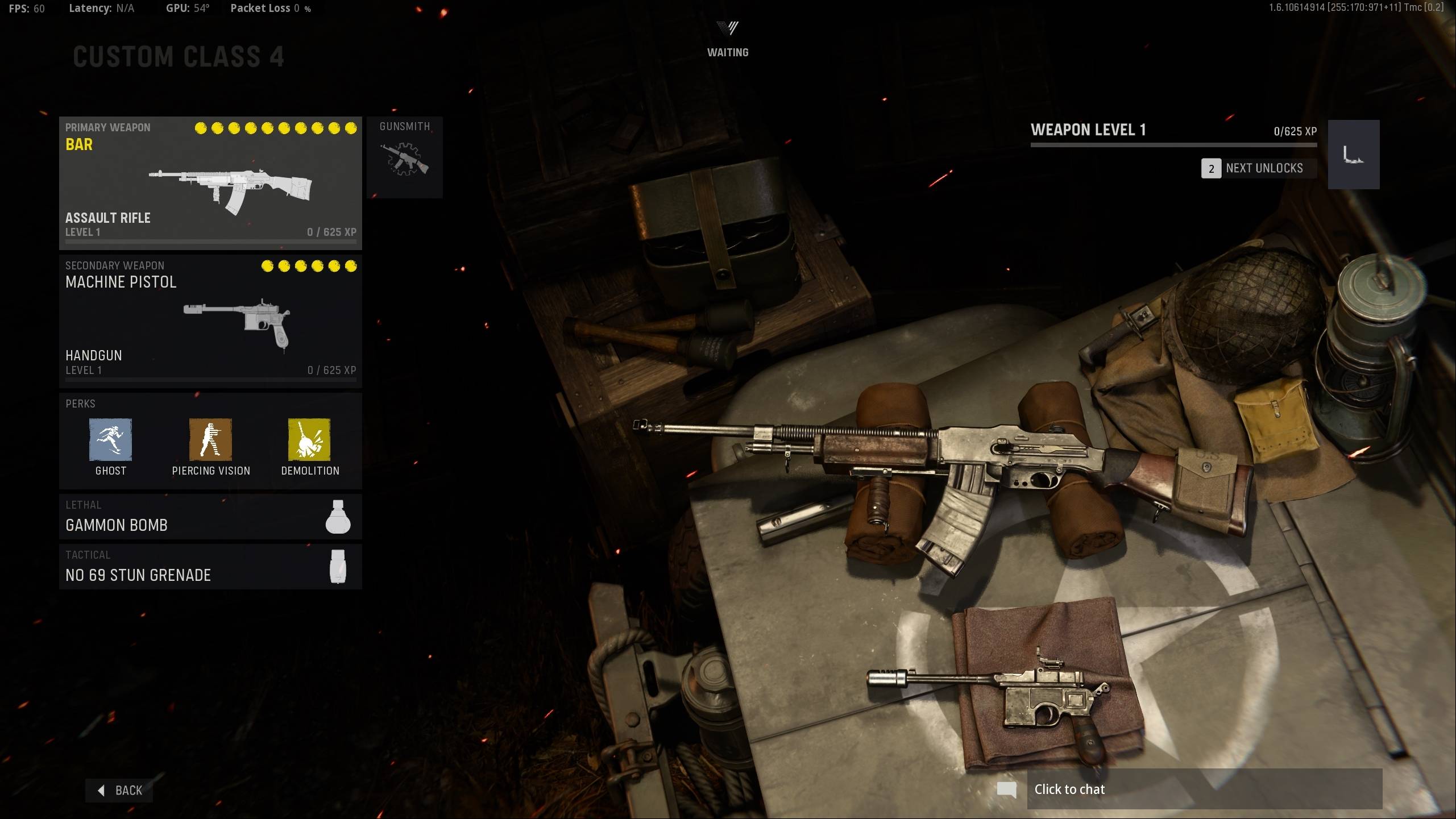